COSSA will hold its 2016 Annual Meeting and Social and Behavioral Science Advocacy Day on March 15 and 16 in Washington, DC. The meeting brings together more than 100 members of the social and behavioral science community and provides a platform for COSSA members to engage with leaders of federal agencies, Congressional staff, and colleagues from across the science and higher education communities.

The meeting on March 15 will take place at the George Washington University Marvin Center and will feature updates from leaders at federal science agencies and panels highlighting issues impacting the social and behavioral science community. On March 16, COSSA members will take to Capitol Hill for Social and Behavioral Science Advocacy Day. They will have the opportunity to meet with their congressional delegations in the House and Senate and educate staff about the importance of federally funded social and behavioral science research.

Keep an eye on COSSA’s annual meeting page for more details as they become available. Early bird registration will open in December.

Rep. Sam Farr (D-CA) announced his retirement from Congress at the end of his term after 22 years in the House. Farr is the Ranking Member on the House Appropriations Subcommittee on Agriculture, Rural Development, Food and Drug Administration, and Related Agencies. As Ranking Member, Farr has been a vocal advocate for agricultural science and statistics, memorably speaking out on the House floor against a proposed amendment to cut funding for the Economic Research Service (ERS) in 2014. It remains to be seen who will fill Farr’s spot. Currently, only three other Democrats serve on the Subcommittee.

The National Institute of Neurological Disorders and Stroke (NINDS), National Institute on Aging (NIA), and the Office of Disease Prevention (ODP) within the National Institutes of Health recently released a time-sensitive request–for-information (RFI) (NOT-NS-15-045) seeking the input of the scientific and broader community regarding the “most important needs and promising opportunities for research” on Alzheimer’s Disease-Related Dementia (ADRD). The information received will be used to update the National Plan to Address Alzheimer’s Disease, which is congressionally mandated to be updated annually (see Update, August 10, 2015).

Additionally, the RFI announces a March 29-30, 2016 ADRD 2016 Summit sponsored by NINDS and NIA “to assess progress and review and update the recommendations” from the Alzheimer’s Disease-Related Dementias: Research Challenges and Opportunities 2013 Summit. Those recommendations and priorities were used to develop the ADRD research budget and were incorporated in the recently released Alzheimer’s bypass budget for FY 2017 (see Update, November 3, 2015).

The revised recommendations will be made public for additional comment at the March 2016 Summit to be hosted on the NIH campus. That meeting will be free and open to the public. The final recommendations will guide NIH-funded ADRD research for the next decade. Comments are due December 18, 2015. For more information and/or to comment see the notice.

The National Institute on Drug Abuse (NIDA) within the National Institutes of Health (NIH) has announced a new Challenge/Prize Competition, “Addiction Research: There’s an App for that.” The objective for the challenge is to “promote the development of innovative mobile applications (apps) for future addiction studies.” According to the notice, three prizes may be awarded: $50,000 (first place); $30,000 (second place); and $20,000 (third place).

NCATS “focuses on what is common across diseases and the translational process” emphasizing “innovation and deliverables, relying on the power of data and new technologies to develop, demonstrate and disseminate improvement in translational science that bring about tangible improvements in human health.”

Specifically, NCATS is seeking input on such issues as breaking down “professional, cultural, and scientific silos;” emphasizing inter-operability of data systems; “focusing on patient-driven research and patient/community engagement; forming innovative partnerships with a wide variety of stakeholders; identifying skillsets and competencies needed for training the next generation of translational scientists,” using “modern communication and dissemination tools to expand awareness of translational science to a wide variety of stakeholders.”

Comments are due January 8, 2016. For more information and/or to provide input see the notice.

The London-based magazine Times Higher Education has released its 2015-2016 World University Rankings for the social sciences. The U.S. leads in terms of number of universities represented, with 43 in the top 100, 35 of which are COSSA member universities. COSSA congratulates all the universities and colleges that made the list.

In an article accompanying the rankings, James Wilsdon, chair of the UK’s Campaign for Social Science, suggests that the relative dominance of American universities on the list should give pause to those in Congress looking to cut funding for the social and behavioral sciences. “If I was [looking at the ranking] as a US policymaker, I would take it as a powerful warning to think twice before I start to chip away at what’s clearly a very strong US position.” 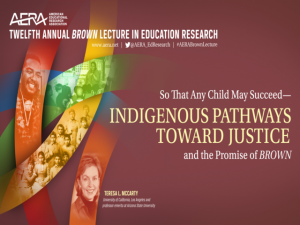 Teresa L. McCarty, professor of education and anthropology and world-renowned scholar on indigenous language planning, policy, education, and revitalization, presented the 2015 American Educational Research Association (AERA) Brown Lecture in Education Research, “So That Any Child May Succeed—Indigenous Pathways toward Justice and the Promise of Brown,” in October. McCarty is a professor at the University of California, Los Angeles and professor emerita at Arizona State University.

McCarty’s lecture considered the legacy of the 1953 Brown v. Board of Education case and the “broader issues of education equality, in the context of research, policy, and practice in Indigenous education.” She also examined the “hard-fought pathways toward educational justice forged by Indigenous educators, parents, leaders, and allies; the larger colonial project in which those efforts are embedded; and the ways in which Indigenous initiatives are braided with those of others.” McCarty spoke about the continuing challenges associated with achieving Brown’s promise, specifically, “the simultaneous homogenizing and stratifying effects of current education policy—and what can be learned from diverse models of contemporary Indigenous education practice.” The lecture is available on AERA’s website.

Neuroscientist Adam Gazzaley, University of California, San Francisco, discussed his research and what he described as “the new frontiers” in video games and neuroscience. The November 5 presentation was part of the NIH Behavioral and Social Sciences Seminar Series, sponsored by the National Institutes of Health (NIH) Office of Behavioral and Social Sciences Research (OBSSR).

Gazzaley noted that humans have longed been consumed with achieving high-level performance, particularly when it comes to physical fitness. However, when it comes to the human brain and improving “those core functions that are really fundamental to what makes us humans—higher order cognitive ability, perception, memory, emotional regulation, decision making, compassion, wisdom,” Gazzaley maintained that we are not doing quite as well. He further emphasized that we are not taking advantage of all the amazing innovations in neuroimaging and cognitive neuroscience to understand in detail what is occurring in the brain.

He described his lab’s approach to addressing this issue, as one “that uses custom-designed video games to achieve meaningful and sustainable cognitive enhancement.” Gazzaley believes that technology can be used to “create powerful experiences” and that those experiences are the “gateway to plasticity, that complex dense of change that occurs in the brain.” The challenge, he argued, is to use modern technology to “build experiences that harness plasticity and direct it to better our lives.” To illustrate, Gazzaley pointed to the increased level of sophistication in the gaming industry, including the ability to feed real time information into the game, thus, allowing the circuitry of the brain to be changed. 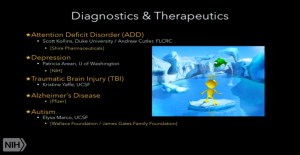 Gazzaley, who has been supported by the National Institute on Aging (NIA), cited as an example the impairments that older adults experience as part of healthy aging as an area where “playing games” can have an unexpected positive impact for the game player. He shared his first foray into games as therapeutic research seven years ago when he and a team of video game developers were able to create a driving game and had older volunteers play it. To their amazement, subjects showed improvement in areas of cognitive control that were not “directly trained by the game,” including significant improvement in working memory and an increase in sustained attention.

Gazzaley also discussed the next stage of his research program, which uses video games integrated with technological innovations in software and hardware to treat neurological and psychiatric conditions, as well as better target our educational efforts. There are a number of games that are now entering research studies, he explained. His lab is looking for changes across indicators including structural MRIs, EEGs, stress, blood work, inflammatory markers, sleep, and lifestyle measures to better understand how the games change us.