With Budget Deal in the Books, Work Turns to Finalizing 2016 Spending Bills

Last week was an eventful one in Washington. In just about 72 hours, House and Senate negotiators successfully brokered a two year budget deal with the White House, effectively providing two years of relief from sequestration (i.e. the painful spending caps holding down discretionary spending) and suspending the nation’s debt limit, which would have been breached this week without Congressional action, until early 2017. Last week also ushered in a changing of the guard in the House, with the resignation of Rep. John Boehner (R-OH) as Speaker and as the Representative from the 8th District of Ohio, and election of Paul Ryan (R-WI) as the new Speaker, effective immediately.

The Bipartisan Budget Act of 2015 provides sequester relief for two years (FY 2016-2017) by temporarily lifting the top-line discretionary budget caps set by a previous budget deal. The deal provides for $80 billion in additional discretionary funding over two years ($50 billion in FY 2016 and $30 billion in FY 2017), split evenly between defense and non-defense spending, and an additional $16 billion in Overseas Contingency Operations (OCO) funding. This means that for FY 2016 (which began on October 1, 2015), non-defense discretionary spending (which includes federal research accounts) will receive an additional $33 billion spread across the government.

Now that a budget deal has been reached and sequestration relief temporarily achieved, Congress will return to its work on enacting final FY 2016 appropriations bills. Appropriations Committee leaders in the House and Senate will provide guidance to their respective subcommittees this week on how much additional funding each will be allocated under the agreement. Once the subcommittees receive their new allocations (known as “302(b) allocations”), the subcommittees will get to work on revising their bills and conferencing with the other chamber to reach a final agreement. Congress has only about four working weeks to complete the FY 2016 appropriations bills before the current stop-gap spending measure expires on December 11. The risk of a government shutdown in December still looms, but the chances have been drastically reduced thanks to the budget agreement passed last week.

For more information on the budget deal, check out the detailed analysis prepared by AAAS.

The National Institutes of Health (NIH) Office of Behavioral and Social Sciences Research (OBSSR) has issued a request for information (RFI) (NOT-OD-16-018) seeking the broad input of the scientific community and the public, including academia, industry, health care professionals, patient advocates and advocacy organizations, scientific and/or professional organizations, and other federal agencies regarding the scientific priorities that should be considered as it begins its strategic planning process to update the Office’s 2007 strategic plan for FY 2016 – FY 2020.

OBSSR is congressionally mandated to “coordinate research conducted or supported by the agencies of the NIH; and identify projects of behavioral and social sciences research that should be conducted or supported by the national research institutes, and develop such projects in cooperation with such institutes.” The Office acknowledges the challenges of developing a strategic plan that fully incorporates the breadth of social and behavioral science research that includes psychology, neuroscience, sociology, anthropology, economics, communication sciences, geography, statistics, and various public health sciences. Specifically, OBSSR is seeking input regarding “the critical challenges in the behavioral and social sciences that currently hinder scientific advancement and that, if resolved, would have broad, transformative impact on the behavioral and social sciences.”

Responses to the RFI will be accepted through November 20, 2015. To respond and/or obtain more information see the Notice.

The Department of Health and Human Services (HHS) is seeking comments on the proposed new objectives for Healthy People 2020. The Department intends to use the comments to “shape the framework, objectives, and targets” of the initiative. Comments are being sought in the areas of family planning; preparedness; social determinants of health; and lesbian, gay, bisexual, and transgender health. Additionally, the Department invites suggestions of “additional objectives for consideration that address critical public health issues within the existing 42 topic areas of Healthy People 2020.” Comments will be accepted through November 13, 2015. More information is available here.

Electronic cigarettes (e-cigarettes) have seen a rapid increase in popularity over the past several years, leading to debate between those who see the products as a useful smoking cessation tool and those who are concerned about potential negative health consequences. To shed light on how prevalent e-cigarette smoking actually is, the National Center for Health Statistics (NCHS) has released the first nationally-representative estimates of e-cigarette use. The report shows 3.7 percent of adults currently use e-cigarettes, including 16 percent of current smokers and 22 percent of smokers who have quit in the past year. While only 0.4 percent of non-smokers use e-cigarettes regularly, 3.2 percent have tried them.

Philip Bourne, Associate Director for Data Science (ADDS) at the National Institutes of Health (NIH), and Vivien Bonazzi, ADDS Senior Advisor for Data Science Technologies and Innovation, recently penned a blog post explaining the NIH Commons, which is described by Bourne and Bonazzi as “a shared virtual space where scientists can work with the digital objects of biomedical research.” The ADDS office is responsible for leading the development and coordination of NIH’s data science vision (see Update, October 1, 2015). The blog post provides examples of current Commons initiatives and requests input from the scientific community on the Commons’ concepts and framework. A detailed description of the NIH Commons is available here.

A diverse group of scientific societies and professional associations, including COSSA, have organized to create a coalition to advocate on behalf of the research supported by the National Institute of Minority Health and Health Disparities (NIMHD). The newly formed group, the Friends of NIMHD, is an independent, voluntary coalition launched in 2015 to support the mission of NIMHD and its role in national efforts to improve minority health and eliminate health disparities. 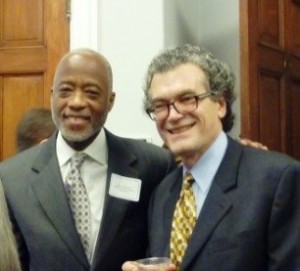 The coalition will serve as a united voice for a broad, diverse network of organizations, institutions, communities, stakeholders, and individuals who care about improving minority health and eliminating health disparities. Its primary mission is to advocate on behalf of NIMHD during the annual congressional budget and appropriations process. The coalition is chaired by Lisa Simpson, Academy Health. Organizations interested in joining the new coalition and/or receive updates regarding its activities can contact Lindsey Horan at Academy Health.

COSSA and more than 100 representatives of professional associations and scientific societies joined Congressional staff and the Friends of NIMHD at a Capitol Hill reception to welcome new NIMHD Eliseo Perez-Stable, who took office in September 2015 (see Update, September 22, 2015 and May 4, 2015).

Kenneth Prewitt, Carnegie Professor of Public Affairs and the Vice-President for Global Centers at Columbia University and a past President of COSSA, has been named the recipient of the 2015 SAGE-CASBS Award. The Award is given by SAGE and the Center for Advanced Study in the Behavioral Sciences (CASBS) at Stanford University (a COSSA member) in recognition of “outstanding achievement in the understanding and advancement of the behavioral and social sciences as they are applied to pressing social issues.” Prewitt will accept the award at the 2015 CASBS Summit on November 5.

The National Institutes of Health (NIH) Office of Behavioral and Social Sciences Research (OBSSR) and the Agency for Healthcare Research and Quality (AHRQ) have jointly released, Population Health: Behavioral and Social Science Insights, which details what is known and remaining gaps in research “about the effects of various behavioral and social factors on longevity, disability and illness, and the quality of life, primarily at the population level.” END_OF_DOCUMENT_TOKEN_TO_BE_REPLACED

On October 26, Richard Hodes, director of the National Institute on Aging (NIA) within the National Institutes of Health (NIH), provided a progress report on the development of a bypass budget to the National Alzheimer’s Project Act (NAPA) Advisory Council on Alzheimer’s Research, Care, and Services. The “bypass” or “professional judgment” budget is transmitted directly from NIA to the President and Congress without being revised through the traditional Federal budget process. Hodes explained that a series of meetings between 2012 and 2015 provided the basis for the comprehensive set of priorities, milestones and budget estimates included in the congressionally-mandated bypass budget (P.L. 111-375). Thirteen of the 27 NIH institutes and centers provided feedback on the potential scientific gaps and priories in the combined milestones. The milestones incorporate the input of the extramural research community which held a trans-NIH staff review and discussion, and were edited to ensure there were a “comprehensive inclusion of priorities” for FY 2017 (see Update, August 10, 2015). END_OF_DOCUMENT_TOKEN_TO_BE_REPLACED

The National Institute on Aging (NIA) within the National Institutes of Health (NIH) recently released 10 funding opportunity announcements (FOAs) in anticipation of a substantial increase in its budget for Alzheimer’s disease research. The topics of the FOAs are in the areas of health disparities, caregiving, epidemiology, diagnosis and prediction, molecular and cellular mechanism, brain aging, and clinical trials. Funding for the FOAs is available beginning in FY 2016. These FOAs have set-aside funds associated with them; as long as funds are available, they will be supported in FY 2016 through FY 2019. NIA director Richard Hodes provided additional details in a recent blog post. The 10 FOAs can be found here.