Congress was able to pass a continuing resolution (CR) on September 30, the final day of fiscal year (FY) 2015, within hours of a deadline that would result in a government shutdown. However, the CR simply kicks the can to December 11, the new deadline for coming to a final agreement on FY 2016 appropriations. While policymakers have provided themselves an additional 10 weeks to complete work on the annual spending bills, the path to the finish line remains unclear, complicated further by recent events like the announcement from House Speaker John Boehner (R-OH) of his retirement at the end of October and the upcoming Republican leadership elections. In addition, the Treasury Department announced last week that the federal government is expected to reach its borrowing limit (“debt limit”) by November 5, several weeks earlier than originally expected. These developments, coupled with real-time negotiations on a larger two-year budget deal, make for a challenging chess match that promises to continue well into December, if not longer. Observers fear that the real chance for a government shutdown will occur in December when the stakes for a budget deal are that much higher.

What’s the likely outcome? It’s anyone’s guess at this point. However, there are several scenarios that could take shape in the coming weeks, including (but certainly not limited to): a grand budget bargain that raises caps on discretionary spending similar to the bipartisan budget deal struck two years ago, which would provide some relief to federal agencies and programs that have been feeling the pinch in recent years; a year-long CR that would fund the federal government at FY 2015 levels for the balance of FY 2016, keeping sequestration in place for another year; or a government shutdown that eventually forces action on one of the aforementioned scenarios. Check out COSSA’s funding updates, policy statements, and letters for a refresher on the latest developments impacting federal agencies and programs of interest to the COSSA community.

The National Academy of Sciences (NAS) has recently released two noteworthy reports. The first, The Integration of Immigrants into American Society, compiles the available evidence on “how immigrants and their descendants are integrating into American society in a range of areas such as education, occupations, health, and language. The second report, sponsored by the National Institute of Justice (NIJ), examined NIJ’s efforts to advance forensic science research and recommend ways to improve its research program. The report, Support for Forensic Science Research: Improving the Scientific Role of the National Institute of Justice, finds, “NIJ has made progress in the past five or six years toward improving its research operations and expanding efforts to build a research infrastructure in forensic science… However, although these improvements are commendable and important, more work is needed to bolster NIJ’s ability to advance forensic science research.”

The Friends of the Institute of Education Science (IES), of which COSSA is a member, held a congressional briefing on September 25 on “Building Strength in Numbers: How Do Early Interventions in Math Instruction Add Up?” The briefing highlighted IES-funded research into how to improve math education for young children. It featured presentations from Prentice Starkey, WestEd; Douglas Clements, University of Denver; and Hirokazu Yoshikawa, New York University. Deborah Phillips, Georgetown, introduced the topic and moderated the session, and Taniesha A. Woods, NYC Administration for Children’s Services, made concluding remarks. The briefing was a follow-up to one held the previous day for staff at the Department of Education. More information can be found here.

The U.S. Department of Agriculture’s (USDA) National Agricultural Statistics Service (NASS), under an agreement with the Economic Research Service (ERS), has begun collecting data on food safety practices from fruit and vegetable packers and processors. The survey, the 2015 Produce Post-Harvest Microbial Food Safety Practices Survey, marks the first time since 1998 that USDA has collected such data. Information from the survey will be used to understand how businesses are implementing the 2011 Food Safety Modernization Act (FSMA). In addition, ERS will use the data to document changes in food safety practices, examine costs associated with compliance with the FSMA, and identify areas for future research.

On September 30, the White House Office of Science and Technology Policy (OSTP) and the Domestic Policy Council (DPC) hosted a live-webcast forum on citizen science and crowdsourcing. The forum, Open Science and Innovation: Of the People, By the People, For the People, recognized that a small portion of Americans are formally trained as “scientists;” however, citizen science and crowdsourcing can “educate, engage, and empower the public to apply their curiosity and talents to a wide range of real-world problems.” Participants in the forum included citizen-science professionals, researchers, and stakeholders from Federal, state, local, and Tribal governments. It also included individuals from nonprofits, academia, and the private sector.

Also on September 30, OSTP director John Holdren issued a Memorandum to the Heads of Executive Departments and Agencies that lays out principles and steps for agencies to follow for utilizing citizen science and crowdsourcing. Check out the memorandum for full details.

The Society for Research and Child Development (SRCD), a COSSA governing member, is accepting applications for its 2016-2017 Policy Fellowship. The fellowship provides an opportunity for scientists to use their research skills in child development to inform public policy by working as resident scholars in congressional offices or executive branch agencies. Applications are due by December 15, 2015.

Two of the recipients of the 2015 MacArthur Foundation Fellowship (the so-called “genius” grants) are social scientists whose research is funded by the National Science Foundation’s Directorate for Social, Behavioral, and Economic Sciences (SBE) Directorate. The fellowship is awarded to individuals in any field “who have shown extraordinary originality and dedication in their creative pursuits and a marked capacity for self-direction.” Fellows receive a no-strings-attached cash prize to pursue their work as they see fit.

Matthew Desmond is an urban sociologist at Harvard University whose work focuses on “the impact of eviction on poor families and the role of housing policy in sustaining poverty and racial inequality in large American cities.” He is the lead investigator on an SBE-funded research project, “Global Urbanization and Housing Affordability: Poverty, Property, and the City.” MIT economist Heidi Williams conducts research on the “causes and consequences of innovation in health care markets.” She is the recipient of an SBE CAREER award, “Empirical Studies of Innovation in Health Care Markets.”

The National Institutes of Health (NIH) is seeking comments on its FY 2016-2020 Strategic Plan To Advance Research on the Health and Well-Being of Sexual and Gender Minorities (SGM). The agency is developing a strategic plan to guide its efforts and priorities in SGM research over the next five years. The plan was developed after substantive analysis and integration of portfolio analyses, community input, inter- and intra-agency collaborations, and recommendations from the NIH-commissioned Institute of Medicine report, The Health of Lesbian, Gay, Bisexual, and Transgender (LGBT) People: Building a Foundation for Better Understanding, released in 2011 (see Update, April 18, 2011).

The strategic plan promotes and supports the advancement of basic, clinical, and behavioral and social sciences research to improve the health of people whose sexual orientations, gender identities/expressions, and/or reproductive development vary from traditional, societal, cultural, or physiological norms. The agency intends to coordinate research in each of the areas above with NIH intramural and extramural program directors and researchers. The plan is expected to provide NIH with a framework. It is also expected that the research that results from the plan will lay a foundation for improved health and well-being among SGM individuals whose health needs have not traditionally received strong attention from the research community.

Comments must be received by November 2, 2015. For more information and/or to comment see the Federal Register Notice.

The National Science Board, which is the policy-making body of the National Science Foundation (NSF) and independent advisory body to the President and Congress on federal science policy, is seeking nominations for eight vacancies with terms of 2016-2022.  Eight seats on the 25-member Board turn over every two years; members are appointed by the President of the United States for six year terms. The NSB is particularly interested in receiving nominations of individuals with expertise in the following areas: large/complex facility planning, construction, management and transformation; international projects and the globalization of research; metrics and performance measurement; neuroscience and the brain; information science and large/complex/novel data and related analytics; undergraduate research; diversity enhancement; social communications and cognitive science and technology; science of education and STEM learning; biomedical engineering; advanced manufacturing; and sustainability, water and global change. Nominations are due October 30.

At the September 1 meeting of the National Institutes of Health (NIH) Division of Program Coordination, Planning, and Strategic Initiatives (DPCPSI) Council of Councils, Associate Director for Data Science (ADD) Philip Bourne discussed the opportunities and challenges of data science. Bourne began by asking: “What are we going to do with our data?” He explained that from his point of view, science is at point of significant change as a consequence of the amount of data that is being generated. Biomedical research is becoming more analytical, and scientific change is happening faster than anticipated as a result of faster accumulation of data. He suggested that one could now argue that biomedical research is at that point of digitization, noting that preclinical research has been digital for quite some time. The convergence of the use of the electronic health record (EHR) represents a further drive toward science digitization. Consequently, he stressed the need to assume that there will be some sort of “disruption” going forward, that is, a change in the way science is conducted as a result of digitization. Accordingly, NIH needs to begin thinking about how it will deal with any such disruption, said Bourne. END_OF_DOCUMENT_TOKEN_TO_BE_REPLACED 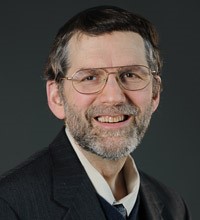 On September 28, National Institutes of Health (NIH) director Francis Collins announced the selection of Michael S. Lauer as the new Deputy Director for Extramural Research. Collins noted that Lauer brings both research expertise and administrative skills to the job, as well as “keen insights into the world of extramural research.” Lauer is expected to begin this new position within the coming weeks.

Lauer served as the National Heart, Lung, and Blood Institute (NHLBI) director of the Division of Cardiovascular Sciences. Prior to that, he served as director of NHLBI’s Division of Prevention and Population Science, and most recently, the NIH co-chair for President Obama’s Precision Medicine Initiative.

Lauer’s primary research interests include cardiovascular clinical epidemiology and comparative effectiveness, with a focus on diagnostic testing. He also has a strong background in leadership of the cardiovascular community and longstanding interests in medical editing and human subjects protection. 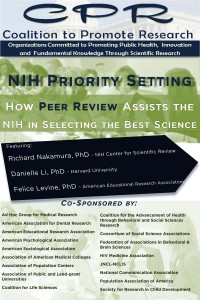 The briefing, NIH Priority Setting: How Peer Review Assists the NIH in Selecting the Best Science, highlighted the process used by the NIH’s Center for Scientific Review (CSR) with the help of scientific experts from around the country.  Briefing speakers included CSR director Richard Nakamura and Danielle Li of Harvard University.  Felice Levine, executive director of the American Educational Research Association (AERA), served as the moderator. END_OF_DOCUMENT_TOKEN_TO_BE_REPLACED