On April 21, the Senate Appropriations Committee approved the fiscal year (FY) 2017 Commerce, Justice, Science and Related Agencies (CJS) Appropriations Bill. This bill serves as the vehicle for annual appropriations for the National Science Foundation (NSF), Census Bureau, National Institute of Justice (NIJ), Bureau of Justice Statistics (BJS), and countless other federal departments and agencies. The next step for the CJS bill is consideration on the Senate floor, which has not yet been scheduled. 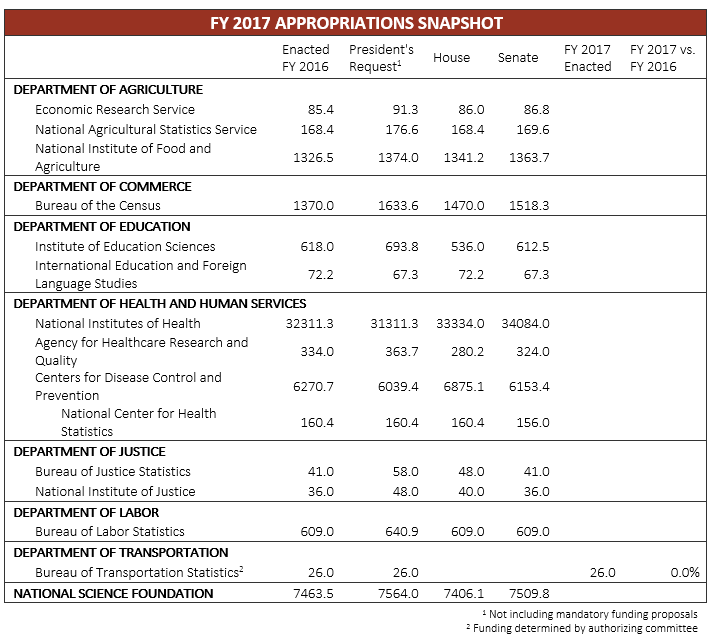 The bill would provide NSF with a total budget of $7.5 billion in FY 2017, flat with the FY 2016 enacted level. Most notably the Senate bill does not include language singling out social science (or any other scientific disciplines) for cuts or preferential treatment, as we saw last year in the House bill. However, there is language calling on NSF to include criteria in its merit review process considering a project’s potential for advancing U.S. “national security and economic interests.” Further, NIJ and BJS would be held flat for another year at $36 million and $41 million, respectively. Finally, the Census Bureau would receive an increase, but not the amount requested by the Administration for the continued ramp up to the 2020 Decennial Census.

Read on for COSSA’s full analysis.

You can keep up-to-date on the status of FY 2017 funding for social science research agencies on the COSSA website.

On April 6, the Senate Health, Education, Labor and Pensions (HELP) Committee held the third in a series of hearings (March 16 and March 9) to complete its work on companion legislation to the 2015 House-passed 21st Century Cures Act.

Opening the hearing, HELP Committee Chairman Lamar Alexander (R-TN) noted that the committee has completed action on approximately 50 bipartisan proposals via 10 hearings and five staff working groups that held more than 100 meetings. The proposals resulting from these deliberations form the Senate’s companion legislation to the 21st Century Cures Act. The legislation also serves as the means of codifying the President’s proposed Precision Medicine and Cancer Moonshot initiatives. The Chairman emphasized that the Senate’s “Innovation or ‘Cures’ legislation…will be the most important new law enacted this year.” END_OF_DOCUMENT_TOKEN_TO_BE_REPLACED

Andrew Bindman, a primary care physician and Professor of Medicine, Health Policy, Epidemiology, and Biostatistics at the University of California, San Francisco, has been named the new director of the Agency for Healthcare Research and Quality (AHRQ) effective May 2, 2016. His research interests focus on primary care and low-income individuals’ access to and quality of health care. Bindman’s previous federal experience includes a fellowship with the House Energy and Commerce Committee and several years as a senior advisor to the Assistant Secretary of Planning and Evaluation (ASPE) Office of Health Policy and the Centers for Medicare and Medicaid Services. Bindman replaces Richard Kronick who left the agency in March after two and a half years as director.

The National Center for Health Statistics (NCHS) has released the most recent issue of one of its hallmark publications, Health, United States. The 2015 edition compiles data on the health of the U.S. population, including on mortality and life expectancy, morbidity and risk factors, health insurance coverage, access to and utilization of health care, and health expenditures. This year’s edition also includes a special feature on racial and ethnic health disparities. The full report can be accessed on the NCHS website, as well as the shorter Health, United States, 2015: In Brief.

National Institute of Justice (NIJ) Director Nancy Rodriguez issued a Dear Colleague letter last month identifying additional research topics as part of the agency’s Comprehensive School Safety Initiative (CSSI). The additional guidance suggests topics of interest such as “understanding and reducing disparities in school discipline; involvement of local stakeholders and multiple disciplines; data systems for school behavior and discipline; inclusion of safety issues for Indian Country schools and students; event sequence and decision-making analysis; and instances where students are removed from the educational environment.” The deadline for proposals is May 27.

COSSA Welcomes the Council of Colleges of Arts and Sciences

COSSA is pleased to welcome the Council of Colleges of Arts and Sciences (CCAS) as its newest member. As its name suggests, CCAS is the national association representing colleges of arts and sciences, with a membership that includes nearly 800 deans at 525 institutions across the U.S. and abroad. The Council exists to “provide professional-development programming to its member deans and to sustain the arts and sciences as a leading influence in American higher education.” Welcome CCAS!

Information on how to join can be found on the COSSA website.