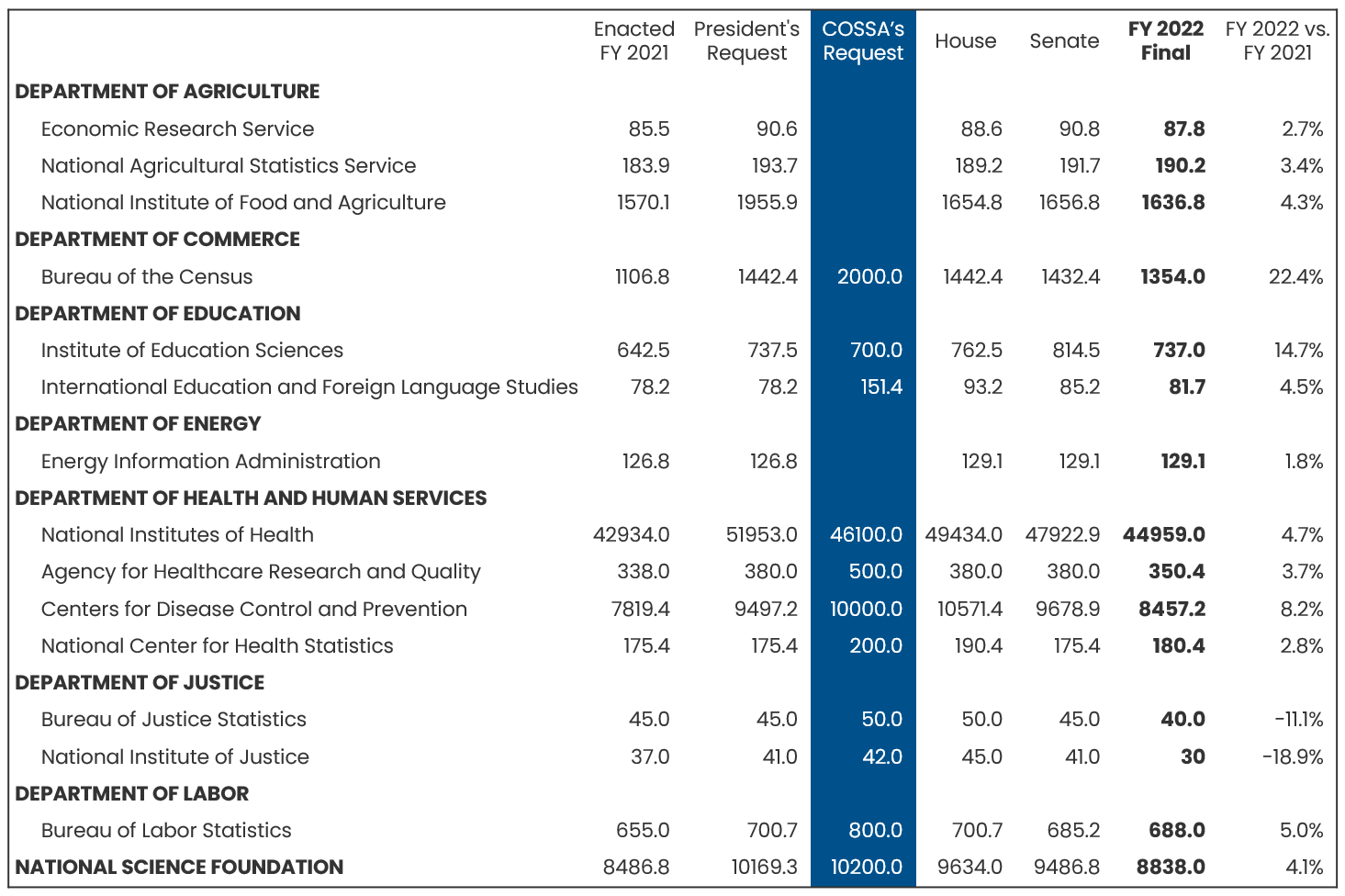 COSSA advocates for sustainable federal funding for and widespread use of social and behavioral science research and federal policies that positively impact the conduct of research.

Statement on the Biden Administration’s Appointment of Dr. Alondra Nelson as Office of Science and Technology Policy Deputy Director for Science and Society

Washington, D.C. — The Consortium of Social Science Associations (COSSA) is greatly encouraged by the incoming Biden-Harris administration’s choice to elevate the Office of Science and Technology Policy Director’s position to the Cabinet level and especially heartened by the restoration and expansion of the Deputy Director for Science and Society position. “The choice of Dr. Alondra Nelson for the Deputy Director’s post is an outstanding one,” said Wendy Naus, COSSA’s Executive Director. “Dr. Nelson is a highly accomplished and widely recognized sociologist, whose leadership at the Social Science Research Council has been exemplary.”

The Deputy Director’s portfolio is still being developed, but featuring people prominently in the scientific equation is essential. According to Ed Liebow, COSSA’s board chair and executive director of the American Anthropological Association, “At its core, science is a never-ending and self-correcting quest for advancing our understanding of our evolving universe, a quest that is pursued by repeating a three-step cycle: predict – observe – revise our predictions. And here is where ‘society’ plays an essential role. We consider science to be ‘socially situated,’ by which we mean that at any given point in history, specific social and cultural circumstances shape the scientific problems we choose to pursue, the vantage points from which we make observations and interpret their significance, the investments we make in scientific infrastructure, and how we communicate the importance of scientific findings.”

Whether the applications of scientific research are dedicated to tackling such formidable problems as mitigating the effects of global climate change, eliminating health disparities, doing away with race-based and other forms of social injustice, preserving cultural heritage, or reducing the risk of armed conflict, COSSA stands by Dr. Nelson as she takes on this important service in the public interest.

In recent years, United States federal research agencies have faced growing concerns of reports of U.S. research and intellectual property being stolen, illegally transferred, or tampered with by foreign governments, notably the Chinese government. These agencies have employed a variety of methods to protect research from foreign interference, including commissioning reports for policy recommendations, requesting information from the research community on potential bad actors, issuing clarifying statements on the federal grant application process, and tightening regulations on various parts of the research infrastructure. However, some of these policies—which affect universities and researchers from all disciplines—have been criticized both for creating a chilling effect on the open and collaborative nature of the research community and for unjustly singling out researchers of Chinese descent.

The following pages detail the latest threats of foreign influence on the U.S. research enterprise as well as actions taken across the federal government to address them. As this is a developing story with agencies continuing to develop policies in response, COSSA will be closely monitoring efforts to harmonize agency policies, address concerns of racial bias against Chinese scientists, and protect the open nature of the U.S. research enterprise.

During the final days of the Obama Administration, the U.S. Department of Health and Human Services (HHS) released the final text for its changes to the Common Rule, the regulations that govern research with human subjects, completing a revision process started in 2011. The Common Rule, which was last updated in 1991, affects research supported by 16 federal departments and agencies, including the Departments of Health and Human Services, Agriculture, Defense, Education, Commerce, Labor, and Veterans Affairs, as well as the National Science Foundation.