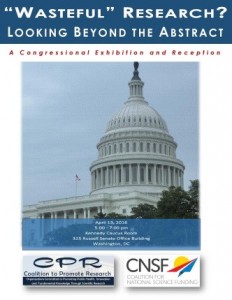 On April 13, the COSSA-led Coalition to Promote Research (CPR) and the Coalition for National Science Funding (CNSF) sponsored a Congressional exhibition and reception, “Wasteful” Research? Looking Beyond the Abstract, designed to provide researchers whose work had been targeted in the various Congressional “wastebook” publications an opportunity to put their research into context for Members of Congress and their staff. The unique Congressional exhibition and reception featured nine researchers from across the disciplinary spectrum. Also presented were posters on the peer/merit review process by National Institutes of Health (NIH) and the National Science Foundation (NSF).

The projects exhibited, with the exception of Leips and Sastry, have been targeted in so-called “wastebook” publications by members of Congress or tagged with that label in media stories. The poster session also provided an opportunity for the event sponsors to demonstrate the value of the review and priority-setting processes under which they were funded. While projects in the various scientific disciplines have been labeled wasteful, many have later proven to be innovative, as explained by CPR co-chairs Angela Sharpe (COSSA) and Patricia Kobor (APA) in an interview with Social Science Space. 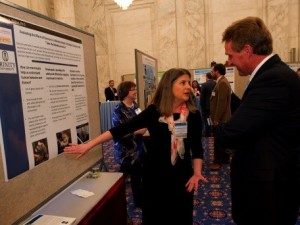 Senator Jeff Flake (R-AZ), author of a Congressional wastebook, attended the event. Flake shared his experience with the Huffington Post: “This has been enlightening, and we want to make sure we are accurate. It is a learning process,” he said. Read the full article here. 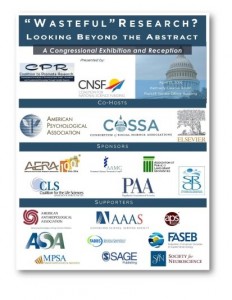