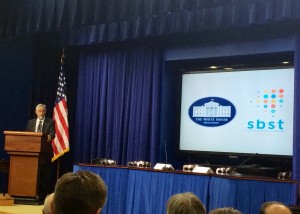 On September 15, President Obama signed an Executive Order calling on federal agencies and departments to use “behavioral science insights” to “design government policies to better serve the American people.” The order comes as the Social and Behavioral Sciences Team (SBST), a team of about a dozen behavioral scientists within the National Science and Technology Council (NSTC), issued its first annual report. SBST was established in 2014 as a mechanism for testing and applying social and behavioral science interventions to make government programs more efficient and more accessible. The team is chaired by the White House Office of Science and Technology Policy (OSTP) with participation by a dozen federal agencies, departments, and White House offices.

The Executive Order signed by the President makes SBST a permanent part of the federal government and encourages federal agencies to work with the team to identify programs, policies and operations that could benefit from behavioral science insights and develop strategies for applying them; recruit behavioral scientists into federal service; and “strengthen agency relationships with the research community to better use empirical findings from the behavioral sciences.”

As OSTP Director and Assistant to the President for Science and Technology John Holdren stated during a White House event on September 15, “social and behavioral sciences are real science, [and] abundantly warrant support in the federal science and technology budget.” Other senior Obama Administration officials spoke at the event, which COSSA attended, in support of SBST and social and behavioral science research, including Shaun Donovan, Director of the White House Office of Management and Budget (OMB), who talked about building an evidence agenda that not only identifies “what works,” but also acts on that knowledge to implement best practices.

Those interested in collaborating with the team—such as on a specific program evaluation and/or through a fellowship or other employment opportunity—can register with the team on the new SBST website (http://sbst.gov).