Despite the NIH’s discontinuation of the NCS, in FY 2015, Congress provided $165 million for the study with direction to the agency to continue to support the mission and goals of the study, along with flexibility on how to carry this task out. Tabak announced that the awards associated with this funding will be made in September. As a consequence of not knowing whether Congress would continue to provide the funding associated with the discontinued study (see Update, July 17, 2015), however, NIH fully funded the FY 2015 awards via three initiatives:

Tabak reported that the remaining funds will be used to close out the former NCS program.

To plan for FY 2016, a working group consisting of 16 institutes, centers, and offices co-led by Office of Research on Women’s Health (ORWH) director Janine Clayton has been established to develop the details of the plan, coordinate outreach activities, and craft funding opportunity announcements.

Feedback gathered as part of the working group’s planning process included a call for making pregnancy/prenatal time period a key feature, the inclusion of basic research and training, and the recognition of the importance of standardizing and harmonizing data. There were also a number of questions on the eligibility of specific cohorts.

The plan would ensure that “recruitment plans are robust enough to address racial and ethnic minority health issues” along with a balance between robust characterization of environmental factors and health-related endpoints. He noted that studies may leverage additional features, such as: (a) serving as a test bed for validating new technologies, tools, and approaches for environmental and pediatric monitoring; (b) using systems approaches to develop multi-variable models to predict disease development; and (c) recruiting women during subsequent pregnancies to compare outcomes of first and second children. 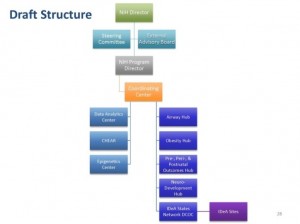 Extant cohorts would consist of responsive datasets comprised of existing cohorts of pregnant women and existing high-risk and non-high-risk cohorts. The requirements for such cohorts include that they provide information on available data/samples/cohorts, have a research plan addressing core elements and focus areas, and address the importance for the synthetic cohort and how it would inform other focus areas

The Coordinating Center, according to Tabak, will provide the organizational framework for the management, direction, and coordination of all sites. It will coordinate interactions of cohort sites and the Analytic Center; standardize protocols, train staff, test inter-rater reliability of the core elements; work with the Analytic Center to insure data acquisition, protocol, and data analysis pipeline standardization; and maintain administrative and project management plans. The Coordinating Center would be overseen by a steering committee comprised of NIH program staff, the heads of the Center, and the principal investigators (PIs) of the studies. There would also be a scientific advisory board made up of external experts.

Tabak noted that FY 2016 program needs for the Data Analytic Center includes data science analytics, laboratory analytics, and statistical and informatics analytics. He highlighted the Children’s Health Exposure Analysis Resource (CHEAR), a FY 2015 supported program that is a network of laboratory hubs supporting comprehensive analytic services to measure environmental exposures. CHEAR, he explained to the Council, is capable of performing comprehensive analysis, targeted and untargeted exposure assessment, and assessment of biological response indicators. It is currently establishing data and metadata standards, a repository, and statistical support. Its design is scalable and adaptable, he further explained. There is also consideration being given to leveraging CHEAR including the option of having CHEAR resources contribute specific expertise on the exposure core element in collaboration with other centers and groups contributing to other core elements, and/or establishing a separate data analytics center to coordinate and manage data needs.

IDeA Hubs, Tabak explained, would augment pediatric trials initiated by other entities to improve access to relevant populations and accelerate overall accrual. These hubs would be focused on, but not limited to, clinical trials. Specific training on conducting high quality pediatric clinical trials would be provided to local teams. Prospected data collection would be expected to address the core elements. Research initiated within the networks will be encouraged and the hubs would be open to IDeA States awardees.

The IDeA Data Coordinating and Operations Centers would have multiple functions. It would function as an informatics, data coordinating, and operations center for clinical trial implementation. Funding would be provided to cover capitation fees and expenses of collecting data for trials initiated at the IDeA hubs. A steering committee would be composed of an external NIH chairperson (selected by NIH), PD/PIs from awarded IDeA hubs, PD/PI of the Data Coordinating and Operations Center, and NIH staff. It would also include a Data and Safety Monitoring Board and Advisory Board and be open to any qualified organization with an IDeA state awardee partner as the lead or co-lead.

NIH is actively recruiting a full time program manager and considering a couple of governance models.