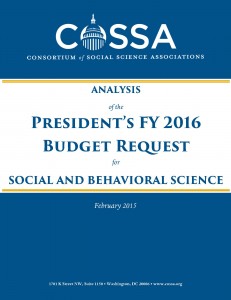 President Obama released his fiscal year (FY) 2016 budget request to Congress on February 2, officially kicking off the FY 2016 appropriations process. COSSA has released its analysis of the President’s budget request. The 62-page report provides funding details for all federal departments, agencies, and programs important to social and behavioral science research. It outlines the President’s funding proposals as they compare to current (FY 2015) levels. In addition, the document serves as a helpful catalog of social science programs and initiatives across the federal government.