At the September meeting of the National Institutes of Health (NIH) Council of Councils, NIH Deputy Director Lawrence Tabak provided an update of the agency’s activities, including an update on the agency’s efforts to pilot “longer-term, stable support” for NIH investigators.

Echoing National Institute of General Medical Sciences (NIGMS) director Joh Lorsch about the state of the NIH’s budget since the doubling period (1998-2003), Tabak explained that the agency is seeking the best models for sustaining biomedical research (see related story). Without Congressional intervention, the sequester returns in FY 2016 (see Update, February 10, 2014). 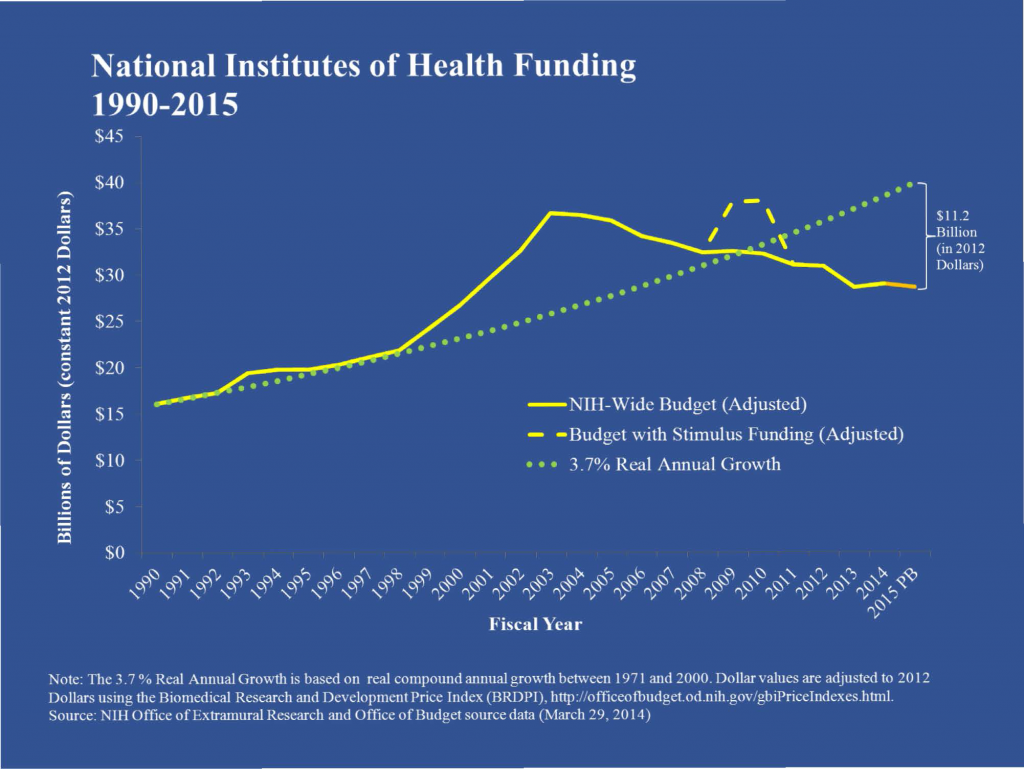 Consequently, Tabak explained, the NIH has given an “enormous amount of thought” as to what the agency can do to enhance the support for extramural research that is budget neutral given the “unprecedented budgetary constraints” NIH is currently experiencing. To this end, the NIH is considering whether it can build on the “successful experience generated from the Pioneer Awards,” and expand these programs to the NIH institutes and centers.

The Pioneer Award Program, initiated in 2004 under the tenure of then-director Elias Zerhouni, was seen at the time as an experiment in science management. The Program responded to the concern that “high risk, visionary research” was not being supported as a consequence of the conservative nature of existing NIH funding mechanisms. Tabak explained that the Pioneer Award Program was also based on the premise that a “person-based” application and accompanying review process would reward past creativity by investigators and encourage innovators to move in new directions. The Award is designed for “pioneering research” which must be a substantial departure from the work that the investigator and anyone else have done the past.The attributes of the Pioneer Award program that led to this consideration include enhanced flexibility for the investigators, promotion of risk taking, longer duration of support, solid level of support, and less focus on project details in the grant application. Tabak conveyed that the hope is the NIH can develop an approach that embodies these principles. At the same time, the agency would like to create an environment that eliminates the “perverse incentives” which contribute to a hypercompetitive atmosphere and may even lead to reproducibility problems.

Tabak acknowledged that when the award was created there were few, if any published analysis award programs. Since then, a number of studies evaluating value of such programs have been done, including the evaluation conducted by the Institute for Defense Analyses at NIH’s request. The analyses have uniformly concluded that higher impact, more innovative science results when applications are shorter, with less preliminary data; review is based on the individual’s track record; applicants received constructive feedback from the review process; grants provide more support with a longer duration of support; and principle investigators have the flexibility to change direction in their research. He cited several organizations that have adopted this type of award, including the Wellcome Trust, Research Council of Canada, Royal Society, and European Research Council.

He informed the Council that several of the NIH institutes and centers (ICs) are developing new funding opportunities. The longer term awards will not have a uniformed approach. IC directors will decide whether or not to embark on these awards based on their strategic planning needs and the balance of their portfolios. In addition, the ICs will also determine the size and duration of the award for their institute or center. He highlighted two pilots currently underway at the National Cancer Institute (NCI) and the National Institute of General Medical Sciences (NIGMS). NCI’s Outstanding Investigator Award will provide long-term support to investigators “who have extraordinary records of cancer research productivity.” Funded investigators will receive up to $600,000 annually in direct costs for up to seven years. NIGMS’ Maximizing Investigators’ Research Award (MIRA) would support all NIGMS-funded research in an investigator’s laboratory with funding ranging from $150,000 – $750,000 in direct costs for five years (see related story). Noting the differences between these two pilots, Tabak explained that the experience and feedback from them along with the information responding to the agency’s requests for information will inform the NIH’s next steps.

The webcast of the meeting is available here.