On September 16, the American Academy of Arts & Sciences, a COSSA member, released a new report, Restoring the Foundation: The Vital Role of Research in Preserving the American Dream. The report makes the case that America’s economic successes in the twentieth century have largely been due to our investments in scientific research and that failure to maintain sustainable funding for research “could threaten the very principles—opportunity, social mobility, innovation—that have inspired our nation for the past century.”

At the report’s release event, Congressman Rush Holt (D-NJ) praised the report’s message but pointed out that a number of good reports have been published in the past whose messages have not been taken to heart by lawmakers. If Restoring the Foundation is to have an impact, Holt cautioned, its publication cannot be the last step. He also criticized the “can’t do” mentality in Congress caused by a relentless focus on debt and deficits. Ensuring that the next generation is better off than the current one is a commitment we must make as a nation, he said, not something we can simply hope will happen on its own.

Norman Augustine, co-chair of the report committee, retired Chairman and CEO at Lockheed Martin Corporation, and former Under Secretary of the U.S. Army, observed that the U.S. is falling behind other nations in its investments in R&D. America is 10th in R&D investment as a percentage of GDP, a number that has fallen 13 percent in the last decade. Augustine asserted that because investments in R&D benefit the larger economy, it makes sense for the government to increase R&D investments, even while being budget-conscious in other sectors.

Neal Lane, University Professor at Rice University who also co-chaired the report committee, noted that the report’s discussion of science and engineering research is intended to apply to all fields of science—including the social and behavioral sciences. He also discussed some of the report’s recommendations. From 1975-1992, federal funding of R&D achieved competitive, sustainable growth, but spending dropped off during the 1990s, to the point where the investment in 2012 was $14 billion below where it would have been had the government stayed on this path. The report recommends an ambitious target of investing 0.3 percent of GDP in R&D by 2032. Other recommendations are aimed at reducing researchers’ administrative burden and expanding partnerships across sectors (for more on the recommendations, see below). 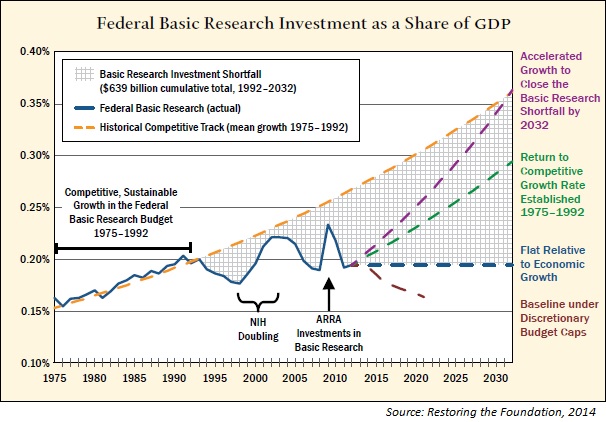 Former Tennessee Congressman Bart Gordon, Partner at K&L Gates and former Chair of the Committee on Science and Technology, said that America can either compete in the global economy based on wages—in a world where more than half of workers make under $3 a day—or by spurring innovation.

Peter McPherson, President of the Association of Public and Land-grant Universities (APLU), said that while the economic and financial benefits of research and innovation are indeed substantial, we should not forget the other, more intangible benefits of investments in R&D: contributions to health, convenience, and enabling technologies.

Hunter Rawlings, President of the Association of American Universities (AAU), discussed some of the negative effects the current funding climate is having. The unpredictability of financial support for research is leading many of the brightest young people to choose other careers, and researchers who do seek funding are more reluctant to propose groundbreaking work, as unconventional ideas are less likely to find support. Furthermore, Rawlings observed, there is an emerging anti-science movement in America, which questions the validity of established theories and disciplines like evolution, climate change, and the social and behavioral sciences. This movement is corroding the public’s trust in the scientific method, at a time when we need the insights of research to help us make good decisions.

Ranking Member on the House Committee on Science, Space, and Technology issued a statement endorsing the message of Restoring the Foundation:

“This report is a stark reminder that we can no longer accept stagnating or falling research budgets and expect to avoid the negative economic consequences… I hope we can work together to move forward with many of the expert recommendations. These important measures will help reinvigorate the U.S. research base and reaffirm U.S. leadership in science and innovation. Our priorities should reflect the undeniable value that federal research and development provides to our economy and way of life.”

Restoring the Foundation offers three overarching prescriptions for revitalizing America’s research enterprise. The recommendations are available in full on the AAA&S website.

(2)   Ensure that the American people receive the maximum benefits from our investment in research. The authors recommend actions like streamlining burdensome regulations and expanding the science and technology assessment capacity of the Government Accountability Office (GAO).